Self portrait while scouting locations 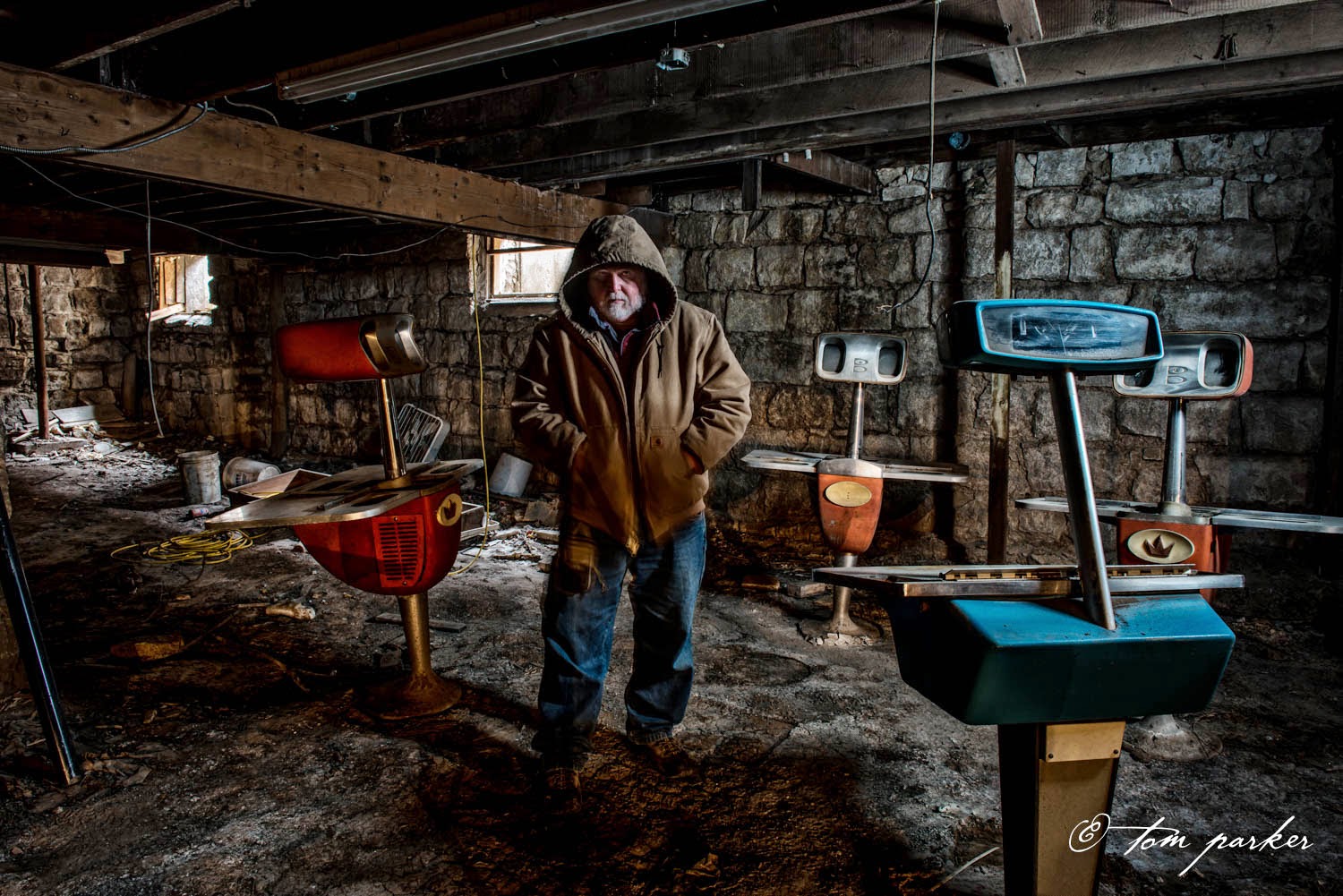 One of the joys of being a professional photographer—a term that still gives me the hives whenever anyone says it—is the constant learning required to master the craft. This is remarkable considering that school was 12 years of unremitting torture, other than for 6th grade when I sat next to a pretty blonde named Amy. Amy, like most pretty girls in 6th grade (and 7th, 8th, and so on) was utterly clueless about my presence except for two miraculous times when I became a trend-setter. The first was when I started packing heat, a perfect replica of the Man From U.N.C.L.E’s Walther, the second when I came to class wearing Beatle Boots. My newborn fame lasted all of one day, which was an education in itself.

This week I learned that if I attempt to use my 24-inch Lastolite softbox with its cheap plastic speedlight bracket in a reasonably stiff Kansas wind, things can and most probably will escalate. Believe me, I learned a lot chasing the softbox across a pasture land-mined with fresh cow pies, mostly involving the matching of photographic equipment to the state’s mercurial atmospherics as well as on-the-fly foot placement during high-speed pursuit across prime Simmental rangeland. (When my wife asked if I was responsible for the mud on the carpet, all I could say is, “not really.”)

I also learned upon arriving home that if one person has had a problem with a particular piece of equipment or gear, someone else has already solved it. Such was the case with the bracket. Within an hour of research a new industrial-strength metal bracket was on the way for the bargain price of $150. I figure it’s worth every penny if I never again have to scrape fresh cow flop from my softbox.

I also learned a new trick for photographing people who hate to have their picture taken. For example, before getting serious with the overwrought subject, I tell them I need to make a few test shots to test my exposure. They immediately relax, and I immediately take a very good portrait. That I did this on a dear friend was probably dastardly not so much for the splendid image but for the fact that I wasted no time in posting it to Facebook. Friends in Clay County have advised me to steer clear of the area for a few weeks or months until the subject in question calms down.

During my two-and-a-half month bout with shingles I learned a lot. I learned about pain management and how to overcome limited mobility, I learned about studio and on-location lighting, I learned new Photoshop tricks and techniques, and I learned that no matter how bad things are, you have to remain optimistic. That, too, is remarkable in that I’ve always been an avowed pessimist. Though I always loved Winnie the Pooh’s innocence and occasional brilliance, I found myself drawn to the sad, lonely, morose Eeyore. Eeyore’s gloomy outlook was the perfect antithesis to Tigger’s bouncy ebullience, and much more aligned with my own personality.

Yet for all of his forlorn bleakness, Eeyore occasional showed glimpses of what passed for optimism. During a particularly nasty winter storm, Eeyore was overheard to say, “It’s snowing still. And freezing. However, we haven’t had an earthquake lately.” On another occasion Owl flew by, and though Owl didn’t say anything to Eeyore, he at least noticed him, and that, Eeyore said, was very friendly and encouraging.

Friends, to Eeyore, were few and far between, but he appreciated the ones he had. When Pooh rescued his missing tail, he said, “Pooh is a real friend. Not like Some.”

Friends, to me, were also rare during my much of my life. But on the drive home from my wild portrait shoot in Clay County I reflected on friends I’ve met since relocating to Kansas, and I realized that my fortune in finding this place was as unimaginable as it was late in my years. (I could hear Eeyore mumbling, “Better late than never, for Some.”) That it happened at all was due to a good woman who had a dream she was willing to share, and for that I am forever grateful. In fact, it comes to me that marrying her was not just another form of education, as any married man will attest, but the exact moment when my personality shifted polarities from negative to positive.

The road was wet and the clouds low, and the few houses I passed were strung with Christmas lights. Topping a high ridge overlooking Randolph and the Flint Hills rolling away to the misty horizon, I was reminded of Dorothy’s “there’s no place like home,” an overworked phrase that nevertheless rang true. For Dorothy, these vast and stark prairies were in many ways like Eeyore’s antithetical opposition to Tigger. Her Kansas was hardscrabble, dusty and poor, while Oz was lush and green, a place where dreams could come true. It was a magical place where one could find their own strengths and resolutions, their own true nature. It’s no wonder that Kansas has attached itself to the Oz motif, and no wonder Kansans half-mockingly call this place Oz. It’s magical, and it’s home, and home is filled with friends and family. There really is no place like it, and no people like its people.
Posted by Tom Parker at 6:04 PM 2 comments:

The gray-haired man in the hospital bed looked more dead than alive but I discerned a slight twinkle in his eye as he studied the photo I’d given him. It was him in a better day, and not long past, when he stood in a faux-saloon in a little town in northeastern Kansas with a pretty dancehall girl at his side, her all gleaming ivories and batty eyelashes and him grim-faced and square-jawed in his knee-length duster, the Colt .45 single-action at his side just itching to clear leather.

“When I get out of here,” he said with a rasp, “I’m going to forget about this place. I’m going to pretend it never happened.”

“I’d do the same,” I said, and though I meant it at the time, I didn’t know what I was saying.

One night I went out for a walk. Not far, only to the nursing home and back, maybe a quarter mile. I slipped into my jacket, donned a wool hat, put a flashlight in one pocket and, almost as an afterthought, grabbed the cane.

It was the first time I’d been out with a cane and it felt intrusive and unwieldy, maybe even a little pretentious. Not that I had much to worry about being seen with it because the night was dark and traffic almost nonexistent. For the first hundred yards or so I swung it jauntily as I’d seen British officers do in old war movies, but after almost launching it into space I decided to play it more circumspect. It wasn’t a fashion statement, for Pete’s sake.

The unevenness of the gravel road was a real test to my imbalance, and more so in the darkness. Surprisingly, I found the cane to be a real help. By the time I crossed the long black void between street lights (and almost died of fright when the cattle resting against the fence stampeded at my sudden presence), it became my third leg. By the time I limped up the driveway cursing myself for having pushed myself beyond my physical limitations, the cane was the only thing holding me up.

Pushing myself, though, was necessary. It’s how we grow, how we mature, how we heal. My walks were infrequent but welcome, and incrementally easier. Everything, in fact, was incrementally easier. There were days when I paid the price but those days were shorter and more spread out, and though they were as intense as anything I’d experienced previously they were impermanent, and I knew it. They could hurt me, but they could not defeat me. This, too, shall pass, I’d say, and it did.

A week later, after unconsciously navigating the stairs to the basement without thought or pain or struggle, the sudden realization made me delirious with joy. I did it twice more in spite of being winded, and gasping in the kitchen I remembered what my friend in the hospital said. Forget this? I thought. I want to remember this until the day I die.

And I also want to to remember the pain, how it turned the world white like an ocular lake effect blizzard, how it seared through my body like lightning bolts or supernovas, how my nerves went mad and fired up until pain killers slowly returned existence to its corrupted state of being, and how a few hours later the process would repeat, repeat, repeat. But most of all I want to remember the Barnes Lighted Horse Christmas Parade, how we parked north of the downtown area and walked through the alley to the fire station on Highway 9 and back up Center Street to the shops and boutiques where Santa enthralled the children with his jolly old self and up and down the street filling with cars and throngs of people and then, with special permission, climbed the steep, treacherous stairs to the second floor opera house where I popped out a screen and leaned far out to frame the entire length and breadth of the downtown with a superwide lens and captured it all, the colorful lights, the decorations, Mrs. Claus following the procession with a diminutive elf at her side, the temporary population explosion of a small rural town, and then made it back down without mishap or wince or groan or imbalance, and went on the following day to photograph a high school senior in another opera house with a sloping ramp that was for the first time in two months not an insurmountable obstacle. I want to remember the immense sense of accomplishment I felt when skipping pain killers for an entire day, and then another. I want to remember the moment when ramps and stairs were no longer a problem. I want to remember it all, the valleys as much as the summits, so that in the future when some slight, trivial thing injects itself into my doings I can shrug it off as easily as removing my jacket. You’ll have to do better than that, I’ll say, and I’ll carry on as if it never happened.
Posted by Tom Parker at 8:21 AM 4 comments: