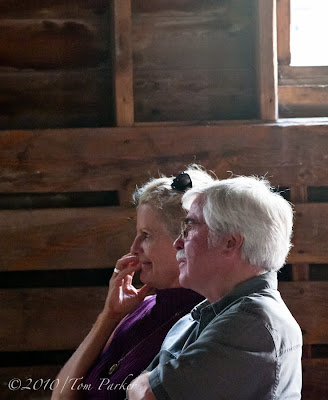 This is a good image. Not bad. Not great, mind you, but I was shooting in a dark barn lit only by a few open windows. I was also clear across the room, separated from William Least Heat-Moon and Q by an admiring throng of moviegoers. I used the Nikon 70-200 f2.8 on my Nikon D700, kicking the ISO to 6400 with an aperture of f4 to f5.6.
I wanted more depth of field but couldn't at ISO 6400. I also knew that at 6400 the amount of noise would be problematic though admittedly not ruinous.
The new Nikon D3s can shoot in the dark. Dark as inside the closet with the door closed. Dark as on the far side of the moon.
ISO 12,800—insane by any standard—is as clean as 3200 on my camera. Virtually noiseless.
This image, captured as they watched the premier of a documentary of his return to PrairyErth, very nicely portrays their emotions. Their expressions are timeless and pitch perfect. It's a photo any photojournalist would envy. I took it, and I'm not happy.
Almost. Ninety percent happy. Ten percent royally pissed.
I keep shooting in the dark and struggling with my equipment. If I stuck to landscapes I would not need anything else. I currently own the perfect setup. Except for one slight problem: I'm also a photojournalist, and photojournalists are rarely in good light. We shoot in auditoriums and barns and theaters and opera houses and smoky VFW halls, even occasionally outdoors. And always, without exception, what we shoot can never be replicated. It's a once-in-a-lifetime event. You don't get second chances. It's like life.
I've put off buying a D3s for a long time, mostly because I can't afford it, my teeth are falling out, the truck burns oil and needs fixed, etc. But having that once-in-a-lifetime chance at nailing my second-favorite author at the exact perfect moment in a dark barn with limited ambient light—and almost but not quite succeeding—pushed me over the edge.
I missed another chance at ordering the camera. It's the most coveted camera in the world today and nobody has one in stock. I snoozed, I let my financial fears have the last word, and now this.
I will not let the opportunity pass again.
So, that's why that single image cost me almost $5,200. Not yet. But soon.
Posted by Tom Parker at 8:27 PM

There. Now that we have that out of the way - what a sensitive, evocative portrait. I've never seen a photo of Heat-Moon before, let alone Q, and I'm just astonished. They look approachable, and dignified, and good-humored. I'd be happy to spend an hour with them on a porch, just sitting, and that portrait gives me the feeling they wouldn't mind it much, either.

One other thing caught my attention - your mention of the photojournalists' problem with replication. But you hinted toward (and I agree with) the fact that it's first a human problem. The same circumstances, the same slant of light, the same level of attentiveness never comes around twice. Five minutes from now may be as good as now, but it never will be the same.

I just took another look at that photo. It's a perfect portrait of a couple absorbed by something other than themselves. That in itself is pretty rare.

Linda -- Obviously Little Miss Point and Shoot got lost in the technical jargon for the most advanced camera in the known universe. Well, sheesh. What can I say? I'm a gearhead.
Seriously, you would have loved Heat-Moon and Q. They were charming and accessible and made everyone there feel like a member of an extended literary family. Which they were, I guess.
While meeting such luminaries is thrilling in and of itself, capturing them in off-guard moments is much more difficult and is often a combination of stalking (a bad term but there you have it) and having the right equipment. I used to settle for second best or worse. Now, with just Lori and me and our own patch of prairyerth, I want the absolute best. It's not greed but desire to capture these fleeting, irreplaceable moments. I'm sure you understand.
I do wish you could have joined us. Heat-Moon in person is PrairyErth personified.

I do understand, of course. I stalk words the way you stalk images. I'm still clumsy enough I can't sneak up on the really good ones, and unfortunately there isn't a better brain on the market I can go purchase!

Ouch. That's one year of college tuition. Or braces. Those are the terms I think in these days. And then there's the two spider partials I need to catch me up on dental work and keep my teeth from falling out. Notice how that's last on the list. If it were just my dental work and not my kids' needs, if the camera could be considered a work expense, and if I had figured out everything on my current camera, I'd probably choose the camera before the dental work or the truck repair. Still, it's a beautiful photo even if not exactly what you wanted. I bet you're a perfectionist:o)

It wouldn't matter if you had the D3 in your possession...you'd still be ticked off...LOL! Nice work - both in terms of image and poetry.

That said, I will tolerate and support your gearheadedness in pursuit of the shot.

Linda -- You almost hit the nail on the head about the relationship between a camera to a photographer and pen and paper to a writer. The difference, of course, is that a photographer can convince himself that new equipment will make him a better photographer. The writer remains wholly dependent on innate talent and wordsmithing skill. Which is all the more fun, considering. (And 9 times out of 10 a new camera will not be the magic fix. But sometimes, ah, yes, sometimes it is.)
Let me hasten to add that I was merely trying to inject some levity by calling you names. I apologize and repent in dust and ashes.

Jenni -- It's also a new kitchen. And did I mention teeth? Having to make such choices is agonizing, frustrating and depressing. Today, 24 hours after writing those words, I keep revisiting the image and trying to convince myself that almost good enough can be good enough if I stop trying to be a perfectionist. How it goes remains to be seen. It's a terrible lot of money that I can in no way justify other than some lame excuse of vision and creativity. You understand.

Farm editor -- Jeez, It's a D3s, not D3! Women!!!!!
But thanks anyway. August is getting evermore nearer and a certain winery and Santa Fe burger...

K -- I apologized already! I was sure you'd understand about gear... A kindred soul.

Besides, Tom's right. I am Little Miss Point-and-Shoot! On the other hand, my current post is a photo essay, and I'm 95% happy with it! Just think how good I'll be when I finally read the instruction book that came with the camera! :-)

The mind is a weird thing... I woke up this morning thinking I should have added,

"Of course, it's always possible to be happier when your standards are lower!"

I am currently knee-deep in "The Road to Quoz". Having read Heat-Moon's previous books I was a little apprehensive about him taking his wife along on his next adventure. OMIGOSH.... I love Q. And look at her in your photo, she's just what I imagined. Don't get caught up in the pursuit of perfection, it's not possible! Most viewers of this photo will not notice the noise, they will notice the expressions, the magic of the moment.

Oh my, I think I'm in love with "Q". Anyway, after seeing your photo I'm sure I'd love to have her as a friend.

Suzanne -- Yes yes yes -- Q is the star and centerpiece of Quoz. I envy you your first reading. I think it was one of his finest books, though nothing compares to PrairyErth. Well, Blue Highways makes you want to hit the road and never come back. It's tough saying which is better. Read them all, I say!
Q was a delight. Thanks for joining in--your website is sweet.