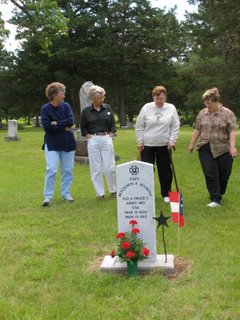 Posted by Tom Parker at 8:54 AM No comments:

A Confederate soldier finally gets honored

The road to Benjamin Pendleton Jenkins’s final resting place leads from Lexington, Ky., to a hill overlooking the confluence of the Little Blue and Big Blue rivers a few miles north of Blue Rapids. According to family history he was an unrepentant rebel soldier, fiercely proud of his time served under the Stars and Bars of the Confederate States of America, though other than a gold-headed cane presented to him by an unlikely source, members of the Grand Army of the Republic, there was no historical record of his service. Family efforts to confirm his military record all failed.

Since 1912, the day he was laid to rest, his grave, shared with his wife, Jeanette, was unmarked. It might have remained that way for another hundred years had not a persistent German taken an interest in replacing some of the damaged headstones of Civil War veterans buried at Prospect Hill Cemetery.

On Memorial Day a special ceremony took place to honor soldiers of the War Between the States who are buried at the cemetery. In particular, the event was to dedicate nine new headstones that had been erected, replacing broken, worn and missing markers. American flags were flying from many of the graves, but beside one marker was a different flag. Rather than fifty stars it had a circle of seven on a blue shield, with a single white stripe sandwiched between two red stripes. The same flag had been raised over the newly-liberated Fort Sumter in Charleston Harbor in April 1861. The Stars and Bars of the Confederacy snapped smartly in the breeze.

Peig Yungeberg, Washington, was there for the service. With her were her sister, Jeanette Fincham, her cousin, Marge Lockhart, and her daughter, Midge Miller. “It was absolutely great,” she said. “It was a thrill—we had finally got it. We got him recognized.”

It was a long time coming, and it almost didn’t happen.

It all started with a simple premise: to replace the worst of the weathered headstones of Civil War veterans at Prospect Hill Cemetery. With 51 to choose from, the selection wasn’t easy. Don Ubben, secretary of the cemetery board, spearheaded the endeavor and finally selected nine for replacement.

The Memorial Program Service, under the Department of Veterans Affairs, provides free replacement headstones for veterans, if certain conditions are met. They even provide shipping the stones to the private cemetery; the only cost associated with the program is that of setting the stone. The Prospect Hill Cemetery board agreed to split the fee with the families of the veterans, or about $50. But since the headstones were for Civil War veterans, the application had to include the service record of the veteran in order for eligibility. This wasn’t a real problem until he applied for Jenkins.

It was early November 2003 when Ubben mailed the request for military records for Jenkins. “This veteran has no gravestone or marker to mark his gravesite,” he wrote. “I would like very much to see that he is recognized and so honored.” A month later a response came that said no records were found. They suggested Ubben contact the National Archives and Records Administration. Their search came up with a Benjamin F. Jenkins who served in Company B of the 1st Missouri Cavalry—the wrong Jenkins.

According to the collective records of the United States government, Benjamin Pendleton Jenkins never served in the military, or if he did, the files were missing. There would be no headstone.

“The war was still fought when we were kids,” Yungeberg said. One great-grandfather had joined the Union, the other the Confederacy, and the families were still split decades later. Though BP – Yungeberg uses letters to identify many of her relatives, BP standing for Benjamin Pendleton – never spoke of his brothers after the war, those who fought with Ulysses S. Grant, their offspring were left to carry on the battle.

Yungeberg recalled when her parents would go somewhere and leave them for the evening with her grandparents, her grandmother would always lead them in singing songs like “Marching Through Georgia,” a Union-slanted hymn sure to bring fire to the belly of a Reb. With roles were reversed, a different grandmother with different sympathies returned the favor. Clearly, the grandmothers relished the antagonism, and the parents would be furious, and the children found it humorous.

Yungeberg knew BP through family lore. He was born in Kentucky and had moved to Missouri, where he enlisted in the Confederate Army. After the war, he returned to Missouri but found no welcome, and left for Wichita with his wife. When that didn’t pan out, they tried Missouri once more, but left shortly after and made their way to Blue Rapids.

She was taught that he fought border skirmishes, the battles of Pea Ridge and Wilson’s Creek, and manned the breastworks at Vicksburg, under the leadership of General Sterling Price. An article in the Jan. 10, 1907 edition of the Blue Rapids Times mentioned that their golden anniversary was attended by a large number of Union soldiers.

Though Capt. Jenkins served under the Confederate flag, the article said, “he has an admiration for a brave soldier, regardless of which side he fought on, and he desired to have the Grand Army post invited.” In turn, the GAR members presented him with a rocking chair, and other guests gave gifts of a brooch for Jeanette and a gold-headed cane for BP.

“According to family stories, he was very proud of his Confederate service and never changed his loyalties,” Yungeberg said. So proud that he named his son Jeb Stuart, after the famed Rebel cavalryman.

But other than the few mentions in the newspapers, no service record had ever been found. It was a nagging concern. “When we couldn’t find BP’s records of where he was, I was beginning to think maybe he wasn’t even in Price’s cavalry, because we couldn’t find a record of it any place,” Yungeberg said. “And I thought, well, would they be telling some tall tales?”

Since Yungeberg insisted that her great-grandfather had been on the roles at Vicksburg, Ubben contact Terrence Winschel, a historian at the National Military Park, Cairo Museum, at Vicksburg. Winschel was unable to find Jenkins listed among the soldiers who were paroled following the surrender of Vicksburg, nor was he mentioned on Tom Broadfoot’s listing of all Confederate soldiers who served during the Civil War.

Winschel suggested applying through the state where Jenkins was supposed to have enlisted in. That being Missouri, Ubben sent a request for military records to the Missouri State Archives, under the office of the secretary of state.

The reply came in late January. A service card had been found for Private Ben Jenkins, who was in Co. A, Bowman’s Brigade, Rains Division, Price’s Army. The enlistment date was 1861 and took place in Lafayette County.

“Looks like we’re on the way!” Ubben told Yungeberg in an e-mail. “Now that we have the correct Company, we should be home free.”

Ubben reapplied to the Department of Veterans Affairs, including a copy of the record on the back, with a notation at the bottom pointing to its location.

Two months passed with no reply. Memorial Day was drawing closer and they wanted the stone in place by then. He picked up the phone and called the veteran’s office, asking for an update.

“There’s no verification of records,” the lady told him.

He explained that he had put the record on the back of the application with a notation to look there. After a long pause, the lady said that indeed the record was there, but that normally the staff doesn’t check the back of the form. However, the request had been approved the previous day, on March 29, she said.

“I sat here trying to hold my German temper,” Ubben wrote to Yungeberg. “What a bunch of hugger-muggers.”

B.P. Jenkins was looking for a place to call home after the horrors of Vicksburg. According to family legend, he found it in southern Marshall County, where the hills reminded him of those of his boyhood in Kentucky.

He was buried in 1912 on one of those hills, with a view of the two rivers and the Blue River Valley. There was no marker other than one he and his wife had placed for their two children, and his and Jeanette’s names weren’t listed. Just a patch of green grass that watched the sun set in the west.

Reverend Larry Sizemore, pastor of the Blue Rapids Presbyterian Church, dressed in a black frock coat like those worn by chaplains during the Civil War, opened the dedication with a passage from Joshua 4:19-24. God had instructed Joshua to have 12 stones, representing the 12 tribes of Israel, carried from Jordan to Gilgal for a memorial. “For when in days to come your children ask you, ‘What do these stones mean?’, you will tell them, ‘The stones are an everlasting reminder.”

The color guard stood at attention as a 21-gun salute shattered the silence. Flags rustled in the breeze. All were the Stars and Stripes but one.

Yungeberg, accompanied by her relatives, made her way to a new marble headstone on the west side of the cemetery. It had a slightly pointed top, as befits Confederate veterans, with an inscription of the Southern Cross of Honor at the top. Below it was an arched engraving that read, “Capt. Benjamin P. Jenkins, Co A Price’s Army MO CSA, Mar 15, 1833, Mar 13, 1912.”

“He would have been very proud of the headstone and the flag,” Yungeberg said. “I think it’s absolutely fantastic.”

“Don is a German,” she said. “He gets his teeth into something and he’s going to hang in there. I just really feel blessed that he was able to do that and accomplish what he did, because it took a lot. If he hadn’t have been so dedicated to it, I’d still be out there fumbling, and that’s what I was doing.”

Yungeberg explained that the military record opens up all sorts of new channels for the family. In particular, it enables them to join the United Daughters of the Confederacy, something she said she and her sisters, cousins and daughter will do. “We have everything we need and we can show a direct line into the Confederacy where he fought. We have all that now,” she said. “It makes you wonder where it’ll lead. I hope it leads to others getting Civil War veterans recognized and stones for them, too. If we get these markers for our ancestors, they should stand for a good many years, and these graves will not be lost.”

The small Stars and Bars snapped in the breeze, its pattern different from the others but its colors the same. Below, the rivers joined and formed one union, even as long ago this nation, divided by a protracted and bloody war, came together to form a more perfect union. And on a hill much like the hills of home, a lost but not forgotten soldier was finally honored. At last. At long last.
Posted by Tom Parker at 8:48 AM 1 comment: